LED pool lighting is revolutionising the way we light our pools – and, indeed, the entire art of pool lighting.  But what are they, how do they work and, most importantly of all, what do they cost?  Want to know?  Read on…

LED stands for “light-emitting diode”.  As pool lights, they emit a rich and warm quality of light that not only illuminates your pool much, much more effectively than halogen lights – they do so at a fraction of the energy consumption and, therefore, at a fraction of the running costs: around, if not more than,  4/5th of the costs!

That’s because they work differently, both in terms of light and heat output.

Incandescent lights work by using electricity to heat a tungsten filament that glows when white hot, and emits light in a 360ᵒ arc.  However, 90% of the energy is emitted as heat rather than as light.

Halogen lights operate on a similar principal, except that the filament is encased in a quartz envelope that is filled with halogen gas.  The net result is that halogen lights are able to run at far higher temperatures and produce more light for less power.

LEDs, however, work entirely differently.  LEDs don’t have a filament.  Instead, light is produced as a result of electrons being passed by an electrical current through a semiconductor.  Unlike regular incandescent or halogen bulbs, LED’s don’t emit light in a 360ᵒ arc – instead they emit light in a specific direction.

Unlike regular lights, LED’s do not get particularly hot.  That doesn’t mean, though, that they don’t produce heat – it’s because, just like the light they emit, they produce heat in a specific direction.  As a result of the directional nature of the heat, LEDs are equipped with heat absorbers called “heat sinks” that remove the heat and prevent the LED from ever burning out.

Indeed, rather than “burning out” like traditional filament-driven lights, LEDs merely become (very, very slowly) progressively dimmer – or, to use the technical terminology, they undergo “lumen depreciation”.  The practical upshot is that LED pool lights can keep working for north of 30 years – in practical terms, although the LEDs themselves are likely to outlive any other part of the lighting system, other parts of the light will more than likely fail first. 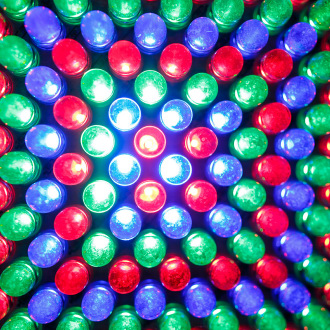 Unlike traditional pool lights, LEDs come in a wide variety of different colours and hues – colours and hues that can be changed by the flick of a switch, or pre-programmed, or be controlled via a smart phone app.

Having said that, however (and just in case your physics teacher is reading this), LED light is only actually emitted in four colors: red, green, blue, or amber.  Different colors, shades, and hues are created by combining these colors: especially the red, green, and blue combination.

Also, although it is perfectly possible to install white LED lights, there is actually no such thing as “white” LED light.  White LED light is created by either combining blue, green, and red LED light, or by putting a yellow phosphorous coating on top of blue LED light.

How Much do LED’s Cost?

1.  Purchase Costs
The price per fixture of an LED light will run between $200 and $700.  The difference in price will depend upon the quality of the product.

LED lights can vary in terms of the colour they produce from anything up to a 15% variance from the ideal specific colour wavelength.  LEDs are priced, therefore, according to the variation from the ideal: the more expensive, the closer to the ideal.

In real world terms, this only really starts to matter when you are using multiple lights in your pool.  If you have multiple lights, you’ll notice if some of them are emitting slightly different shades of light since the wavelengths coming from each of them will vary.  For an average 8.5 x 4.4 metre pool, however, it’s not such a big deal – especially if you’re pool is rectangular and you can get away with using just one light.

Additionally, price will be determined by the material used in the light mountings.  LED pool lights are protected by cages that prevent water from leaking in.  Plastic cages are cheaper than stainless steel mountings – but may be less durable over time, and may look less visually appealing.

The price will also be driven by the technological efficiency of the LED.  Advanced LEDs produce a significantly higher light output for less energy – so much so that an advanced 10 watt LED can easily produce the same amount of light as an older model 20 watt LED.

So how do you know what you’re buying?  How do you tell the difference?  Not by wattage.

2.  Installation Costs
The cost of installing an LED pool light can vary between $200-$700 depending on whether you’re looking to do a simple retrograde installation of existing lights or something much more elaborate.

3.  Running costs
The running costs are where LED’s really score economically.  Assuming an average kilowatt per hour price of $0.27 including GST, a single LED pool light costs around 1/2 a cent an hour to run.

So, in terms of annual running costs, presuming you light your pool for 6 hours a day, 7 days a week, for 6 months of the year, at an average kilowatt/hour price of $0.27, a single LED pool light will cost you $5.90 per year.

Since LEDs are 3-5 times more energy efficient than conventional halogen lights, a 20 watt LED light will emit the same amount of light as a 100 watt halogen bulb.  Comparing the running costs of a single LED to those of a single halogen, therefore, on the same basis of 6 hours a day/7 days a week/6 months a year, a single halogen would cost you $23.58 per year.

How Do You Install an LED Pool Light?

Although it is possible to install LED lights oneself, it is important to be aware that under the Electrical Safety Regulation of 2002 it is illegal in all states for unlicensed individuals to perform electrical work on water equipment – and that includes fitting a new light to a swimming pool.  For full details see ESR 2002 Pt.5 s68, and, in Queensland, ESR 2013 Pt.6 s72.

You will, therefore, need to engage the services of a licensed electrician to install your lighting.  Additionally, the installer needs to ensure that the LEDs and the work complies with Australian safety standards – specifically AS/NZ 3000:2007 that details the required voltages, IP ratings, power supply connection methods, etc.

These are affiliate links. If you use them, they cost you nothing extra. We make a small commission. You can read our disclosure here.